The start of a new commodity supercycle? Rising like a phoenix from the ashes after the pandemic

Published on October 22, 2021 by Mahesh Agrawal

Commodity prices took a severe hit as did the broader financial markets amid the pandemic, with the IMF All Commodity Prices Index falling to 84 in April 2020, its lowest in a decade. The index was at around 120 at the end of 2019, but pessimism caused by the pandemic pushed prices down by around 30% in just four months. However, the subsequent recovery has been even more impressive, with the index rising to 164 in August 2021, an increase of about 100% in less than one and a half years. The sharp movement in commodity prices started the discussion on whether the pandemic has helped end the previous supercycle and begin a new one. In this blog, we discuss commodity supercycle phases, a brief history of the supercycles completed over the past one and a quarter centuries and possible leaders of the new supercycle, if indeed one started in 2020.

“History doesn’t repeat itself, but it often rhymes” – Mark Twain

That is how the concept of market cycles is generally explained. Commodity prices usually follow patterns of successive ups and downs, and a cycle is perceived to be completed once a major upturn and downturn are complete. Although each commodity follows its own cycles and may differ from others to some extent, most individual commodity cycles sync up in the longer term and create a supercycle for the entire complex. Although there is no clear definition of the period or price movement required to complete a cycle or supercycle, there are broad ideas. A cycle is generally classified as a short-term market trend that could end in three to five years. Supercycles, on the other hand, are longer-term in nature and could take more than a decade to end.

A supercycle generally starts with lower investment in new production capacity following years of low profitability and better investment options elsewhere. Meanwhile, new applications or increased use of existing products in different geographies/industries, combined with a buoyant macro-environment, broadens the scope of demand for the commodity. Over time, the new application achieves mass adoption, leading to a spike in demand for commodities while supply has yet to respond. This long response time on the supply side, due to a multitude of factors including government policies and infrastructure requirements, creates short-term imbalances in the market, leading to a surge in prices. Production catches up gradually with demand growth as returns on investment increase. Meanwhile, higher prices push industries to explore alternatives or higher efficiency to maintain profitability. Towards the end of the cycle, demand stagnates while production continues to increase due to the high investment earlier. A supercycle generally follows the five phases mentioned below: 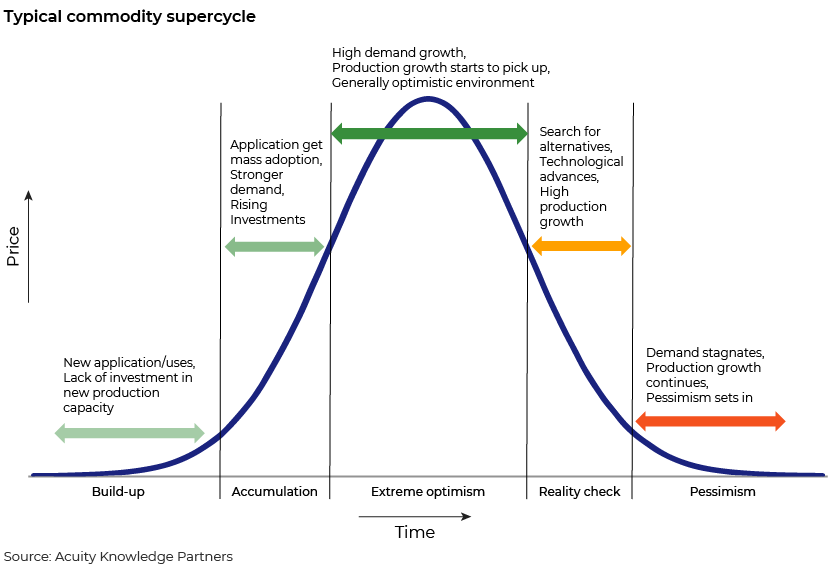 A brief timeline of historical supercycles

Three commodity supercycles have been completed since the late 18th century, and commodities currently trade in either the fourth or fifth supercycle. Some believe the fourth supercycle was completed in 2020 (Scenario 1), when pessimism due to the pandemic was at its peak and global markets collapsed. The quick reaction of federal governments and central banks helped markets recover strongly and pushed commodities to their fifth supercycle. Others believe the pandemic-induced uncertainty remains and the market is overvalued on account of excess liquidity and leverage provided by central banks. As and when deleveraging starts, the market could again witness a dip and, hence, the trough of the fourth supercycle has yet to be reached (Scenario 2). 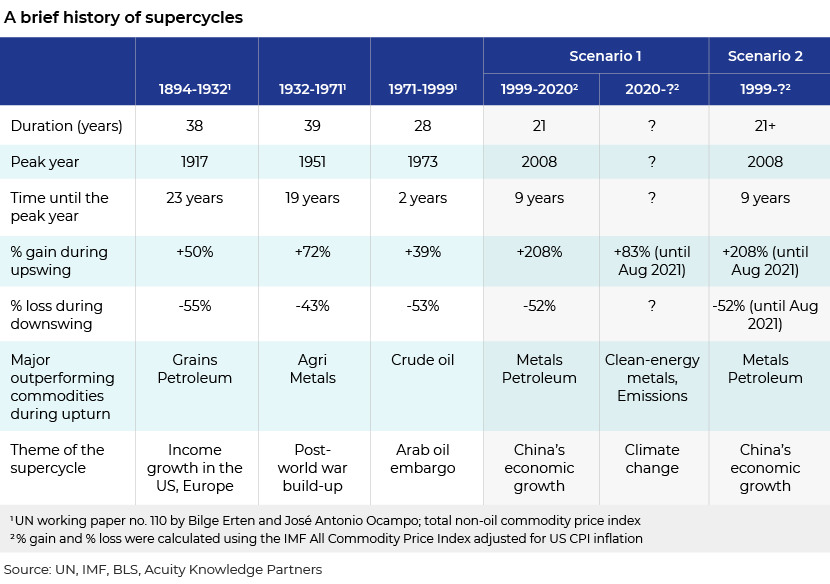 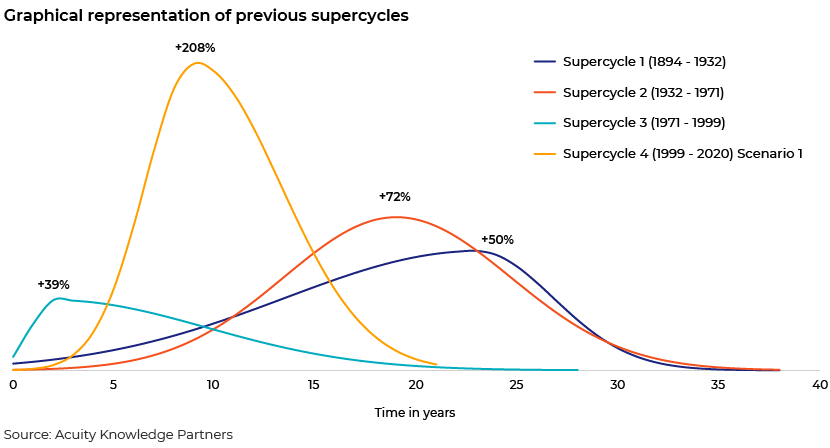 We are more inclined to align ourselves with Scenario 1 and believe most of the negative news was factored into the market during the 2020 correction and the market has already started a new supercycle. As countries reacted with strict lockdowns and other prohibitive measures at the initial stages of the pandemic, pessimism was at its peak and financial markets reacted accordingly. However, countries have responded to the pandemic quite well since then with vaccines rolled out at an accelerated pace and financial markets provided with sincere support.

While the pandemic has yet to be contained completely, vaccinating large sections of the population and herd immunity are likely to limit further damage by the COVID-19 virus and its variants. Collaboration among countries on vaccine research and economic management have also resulted in a healthy and strong economic recovery since the troughs of 2020. Moreover, withdrawal of financial stimulus is unlikely to be rushed, as inflation, one of the major fallouts usually associated with easy money, remains in a manageable range for most countries.

Likely leaders of the current supercycle

Not all commodities perform equally well during a supercycle and not all supercycles are driven by the same set of commodities. As we mentioned previously, a supercycle usually starts with a very tight market for a few commodities in one or more industries, depending on new applications or government policies, and these commodities tend to outperform others overall. For example, grains and petroleum outperformed during the up leg of supercycle 1, agricultural products and metals performed well in the next supercycle, oil was the major driver during the next one and metals and crude oil drove the bull run of supercycle 4.

We believe the climate change could be the major driving force for supercycle 5 as the world recognises the growing threat of pollution to the global eco-system. The 2015 Paris Climate Accords set the ceiling of global warming to well below 2 degrees Celsius (preferably 1.5 degrees Celsius) above pre-industrial levels3 . Countries would need to limit their greenhouse gas emissions to achieve the targets set under the Paris Agreement, requiring that they encourage investment in cleaner energy and discourage polluting sectors. The EU has already set stringent intermediary targets (55% emissions reduction by 2030 and carbon neutral by 20504 ) to achieve the goal and already established a well-structured Emissions Trading Scheme (ETS) to increase the cost of emissions. The US, Japan and Canada have also set targets to limit emissions and have some form of emissions trading systems in place. China has started developing its ETS market recently and aims to reach peak emissions in the near term and to be carbon neutral by 20605 . As countries adopt stringent measures to control emissions, the cost to emit (in other words, emission prices) is likely to increase in the longer term. 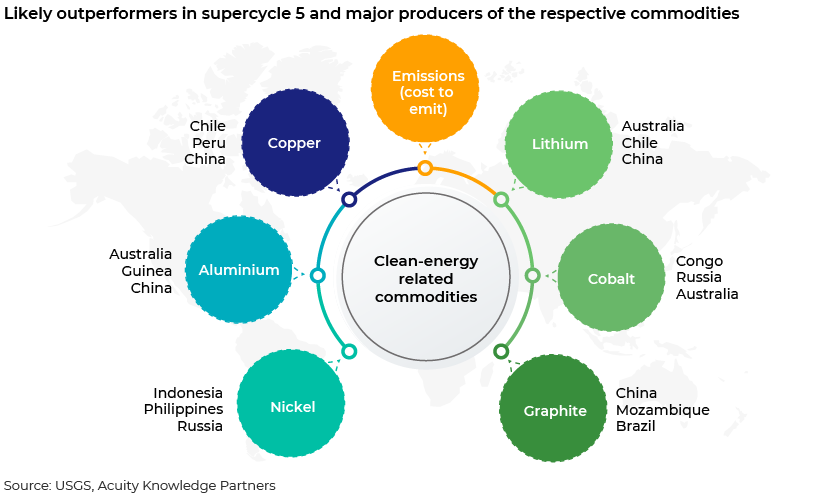 We provide market research on industries, economies and commodities. We have a firm grasp of macroeconomic and market concepts, and expertise in technical and quantitative analysis to provide in-depth market insight on relevant topics. We help clients manage increasing demand on their teams by providing customised managed-services solutions, based on specialised skills and technology, and by delivering operational efficiency, resilience and significant cost savings. 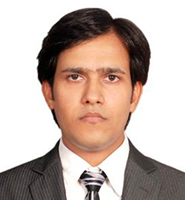 Mahesh has over 11 years of experience in commodity research and has been associated with Acuity Knowledge Partners since Sep 2012. At Acuity Knowledge Partners, he supports a leading European investment bank’s commodity research desk in analyzing commodity markets, preparing research notes and making presentations for conferences and client interactions. Mahesh holds a Masters in Science (Energy Trading) from the University of Petroleum and Energy Studies, Gurugram and a Bachelor of Science from Bikaner University, Bikaner.

Although 2020 saw many unprecedented and unfortunate events unfold, many are hopeful of a ....Read More

The platinum group metals (PGM) are a group of six elements valued for their range of use ....Read More

“Our task is not to bring order out of chaos, but to get work done in the midst of chaos....Read More

The energy sector in 2030 and beyond: Navigat

The global energy landscape is undergoing a transformation and could witness radical chang....Read More