Published on December 7, 2022 by Kalindu Herath

The digital landscape of the world of finance has evolved significantly in recent years, making financial markets and market participants very dynamic in nature. This evolution of digitisation in finance dates back to 1953, when the first banking mainframe was used by Bank of America to process cheques. Next, in 1966, Barclays launched the first debit card, allowing seamless banking across the world. In 1994, Stanford Federal Credit Union launched the first online banking system that enabled all its customers to transact with just a few clicks. This was the final landmark of evolution before the introduction of blockchain in 2008.

Technology-driven advancements have made the finance sector more efficient and accessible as a whole. Key advancements that continue to shape the future of the finance sector include AI-driven analytics, real-time cloud computing, transaction-process automation and the internet of things. A technology on the brink of routine adoption is blockchain.

Blockchain is a distributed ledger technology (DLT) and operates as a decentralised network. It allows digitally storing records of ownership of assets and recording the movement of such assets. As data stored on blockchain cannot be modified, it is a very disruptive technology, with multiple use cases in the finance sector. One of the more recent developments of blockchain use in finance is blockchain securitisation. 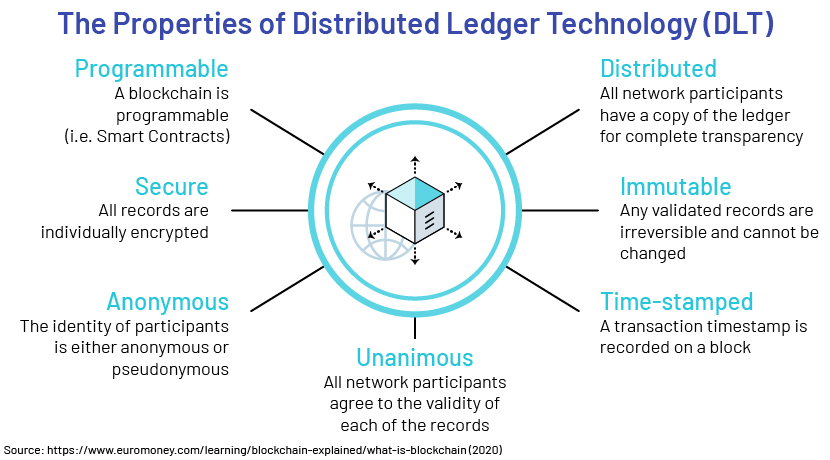 Securitisation is the core of structured finance. The fundamental concept of securitisation is where a company with illiquid, cashflow-generating assets would be able to use these assets as a form of collateral to obtain funds from the capital markets. Illiquid assets, such as loans and receivables, are transferred to a special-purpose vehicle (SPV), which would issue securities to investors who are repaid over time from the cashflow generated by the SPV’s assets. 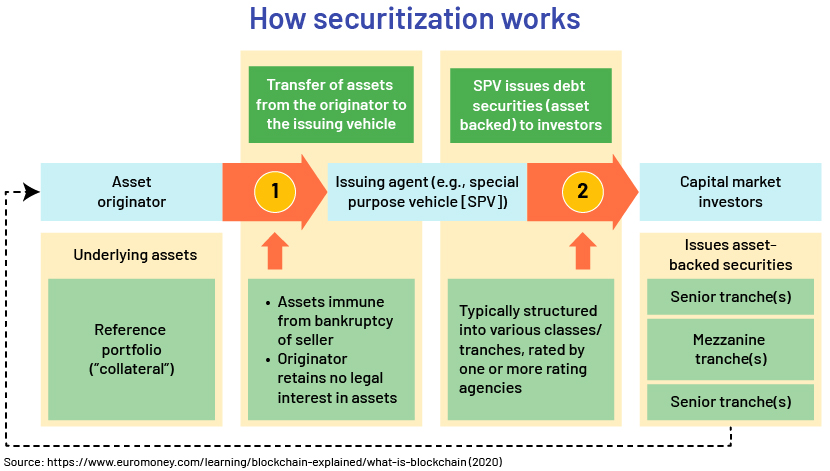 Blockchain securitisation comes into play in the world of structured finance via a process known as “tokenisation”. In tokenisation, typical illiquid assets held by the SPV are converted into a number of “tokens” that represent the individual securities sold to investors on the blockchain. These tokens will then be distributed to each individual investor and act as proof of ownership of each individual security issued by the SPV. Blockchain securitisation would, therefore, catapult structured finance processes to the modern digital age. 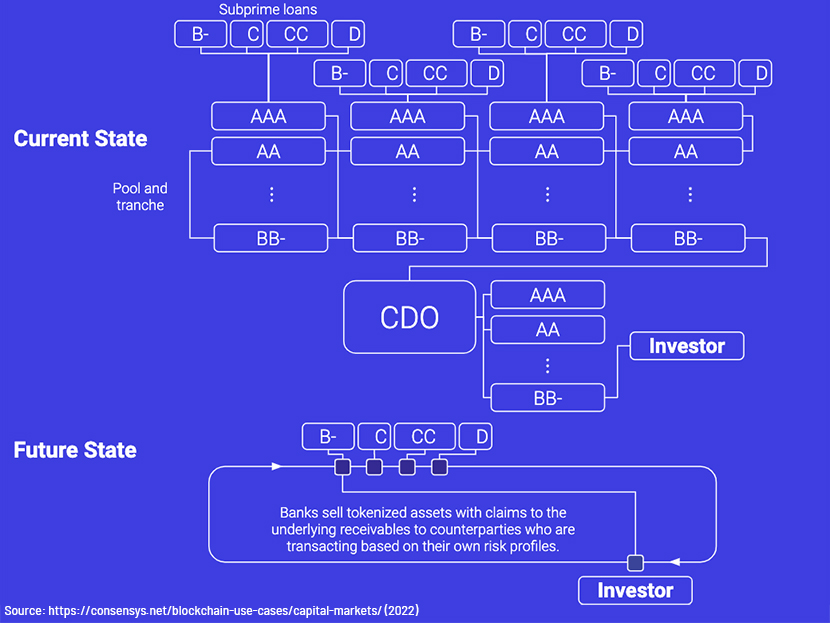 Blockchain securitisation has a number of advantages that would benefit the multiple parties involved in the securitisation process including originators, issuers, servicers and investors.

First, it improves the loan origination and asset collateral pool via the creation of a set of smart contract templates for securitisation, allowing it to form the asset pool and issue the underlying securities at a faster pace. As a result, larger homogeneous asset pools can be created to adapt better statistical analysis and asset diversification. This reduces the possible economic stresses on investors, resulting in an additional form of credit enhancement to protect them.

Surpassing the traditional securitisation process in place since the 1970s

Securitisation has been criticised for its complex transaction structures, which partially fuelled the 2008 financial crisis. Blockchain securitisation would simplify these structures and provide transparency to external parties such as regulators and auditors. This would, in turn, result in greater demand for securitisation-led structured finance solutions around the world, higher originations for investors and a more diversified landscape of structured finance products that borrowers could enjoy.

Despite the growing use and influence of blockchain in modern banking activities, the blockchain securitisation process has several risks and limitations that need to be understood.

First, it is important to note that the finance sector is one of the most heavily regulated sectors in the world. Securitisation transactions are of key interest to regulators because such transactions, including collateralised debt/mortgage obligations, played a vital role in the 2008 global financial crisis.

Due to the inherently complicated structure of securitisation transactions, this area of finance is tightly regulated, so the use of decentralised technology such as blockchain could be a red flag to financial regulators and watchdogs.

An example of the legal and regulatory barriers faced in this space is the Uniform Electronic Transactions Act (UETA) in the US. This act currently covers only preliminary electronic fund transfers and is not updated to reflect the structure and performance of blockchain-based transactions.

Many central banks and monetary authorities around the world are yet to accept blockchain-based tokenised assets as legitimate assets due to their digital nature and lack of centralised control. This includes smart contracts the blockchain securitisation process relies on to work efficiently.

A key factor to note about blockchain technology is that it is not an application that companies can easily adopt. Well-built blockchain securitisation models require all participating organisations to have strong core infrastructure to handle high-end digital transactions. The lack of proper infrastructure would hinder the blockchain’s effectiveness in the securitisation transaction. This could lead to a disruption in the payment waterfall and risk default.

As with any automated system, the foundation for blockchain securitisation is based on human input required to create the relevant blockchain technology and associated smart contracts. Any human error in creating this environment could result in a party failing to meet its obligations. This would cause the entire securitisation structure to collapse, leading to high monetary damage. 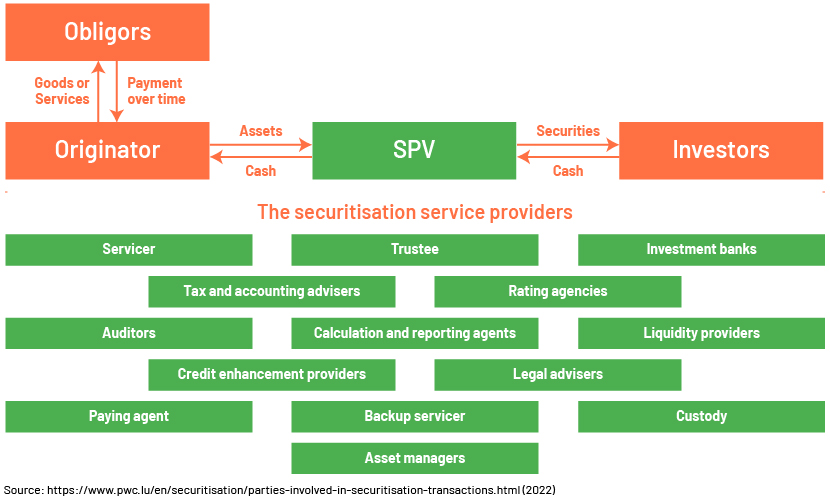 From 2020 to present, Vanguard, one of the US’s well-known investment management companies, has been heavily invested in developing blockchain-based securitisation solutions. By June 2020, Vanguard had collaborated with other participants in the finance sector such as Symbiont, BNY Mellon, Citi and State Street to develop a blockchain pilot designed to digitise the issuance of asset-backed securities.

We provide the latest lending and fintech solutions to our banking clients, helping them optimally utilise and benefit from such emerging technologies and innovations. The digital landscape of commercial lending is evolving rapidly, and it is, therefore, important to identify which modern solutions would be the most viable. 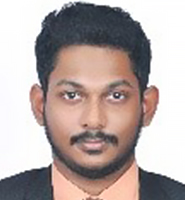 Kalindu has over three years of work experience in Tax, Audit, Assurance and including one year in Lending Services. Currently he is an Associate, attached to the Global Balance Sheet Distribution (GBSD) sector team and responsible for carrying out credit reviews, risk raters, covenant validation and monitoring, collateral monitoring and other credit workflows for the GBSD sector of a leading European based bank. Prior to joining Acuity Knowledge Partners, he worked as a Senior Accountant in the Tax, Audit & Assurance division of an audit firm. Kalindu holds a B.Sc. (Hons) Applied Accounting Degree from the Oxford Brookes University, is an ACCA Affiliate and has passed Level 1 of the CFA Program.

Financial data aggregation: The transition from ....

The expansion of services and offerings of financial institutions (FIs) such as banks, ins....Read More

Exploring use of blockchain technology in the ma....

The blockchain market is currently valued at USD12.7bn, according to a study by Statista, ....Read More