This year commenced with twin shocks – the unexpected “black swan” event of a global pandemic and the oil price war started by the rivalry between Saudi Arabia and Russia. Both events disrupted the US and the world economy and, as a result, central banks, including the US Federal Reserve (Fed), the European Central Bank (ECB) and the Bank of England, have taken measures to boost economic activity in their respective countries.

The economics of negative interest rates

In a negative interest rate scenario, lenders pay additional money to borrowers, instead of receiving interest from them. Therefore, when the Federal funds rate turns negative, the US government gets paid by investors, including banks and mutual funds.

Ideally, interest rate reduction is used as an expansionary monetary policy; this reduces the cost of borrowing and increases spending. Low or negative interest rates make companies borrow more, build up their cash reserves and incur capital expenditure. Demand for goods increases and economic activity gets a boost.

However, negative interest rates send a negative signal to investors and savers about the health of the economy. Bond prices crash due to low demand because of low return on them.

A negative interest rate environment adversely affects banks, as it has asymmetrical effects both on their assets and liabilities sides. On the assets side, borrowers from the bank get lower interest rates on their loans. However, on the liabilities side, it is not possible for banks to pass on the effect of negative interest rates to their depositors; if they do, people will start withdrawing their money. Thus, the cost of funds for banks becomes very high, squeezing their profit margins and even destabilising them.

US President Donald Trump has publicly stated many times that he wants the US to have negative interest rates. One of his main reasons is to weaken the US currency. A weaker USD would give the country’s exports a competitive advantage. It would also boost inflation by pushing up import costs. However, Fed Chair Jerome Powell is of a different opinion and does not seem to be interested in negative interest rates.

The ECB introduced negative interest rates in June 2014 by lowering its deposit facility rate to -0.1% to stimulate the economy. At its April 2020 meeting, it held its rate at -0.5%.

However, these negative interest rates have not measurably improved the performance of the Eurozone economy. Bank margins dropped sharply after 2014. Lower margins and lower loan growth led to lower profitability for banks, eroding their capital and further limiting credit growth.

Japan introduced negative interest rates in 2016. However, its economy was not measurably revived either. Negative interest rates usually send a negative signal to investors and savers about the economic health of the economy and the helplessness of their central banks. Japanese banks, including MUFG, Mizuhu, Resona, Sumitomo and JPB, have seen a decline in profitability and margins since then.

The Fed announced various measures, including reducing the interest rate from 0.25% to 0%, on 15 March 2020, and launched a number of programmes to help borrowers and businesses. The US government has also announced a USD2tn stimulus package to boost the economy.

Yields on short-term US Treasury bills, i.e., bills with maturities of one and three months, turned negative after these announcements as investors continued to prefer short-term debt that acts like cash and is easier to trade than longer-term debt.

As the chart above shows, yields of the 3-month US Treasury bill turned negative, reaching -0.04% on 25 March 2020 and -0.05% on 26 March 2020. However, yields turned positive subsequently and have been above 0% since. The fall in short-term Treasury yields was due to the panic created by the COVID-19 pandemic, with investors moving out of riskier investments such as assets and into less risky investments, including US Treasuries. As investors started amassing these securities, demand for them rose, increasing their price and reducing their yields, as price and yield are negatively related.

First indications of a recession – US inverted yield curve

The yield spread between the 10-year Treasury note interest rate and the short-term borrowing rate (in this case, the 3-month Treasury note) indicates the possibility of either a recession or a recovery in the coming year. The yield-spread diagram above shows that when the yield spread turned negative in late 2000 and late 2006, it was followed by recessions – in 2001-02 and 2008-09, respectively.

Yield spread turned negative again in mid-2019 and remained negative for a few months. Negative spread is due to higher short-term interest rates, stimulated by the Fed, and lower long-term rates, due to a slow economy and investors seeing fewer investment opportunities in the bond market.

Yield spread bounced back to positive territory by end-2019 and further in March 2020 and has remained positive since. This is due to market volatility caused by COVID-19-related fears and supply-chain disruption, leading to investment in risk-free US Treasuries and taking the 10-year Treasury note to historic lows. The Fed has been dropping the Federal funds rate since then, and the 3-month Treasury rate has now dropped to near zero.

The following charts shows US banks’ net interest margin (NIM) and return on equity (RoE) over the years. In a negative or low rate environment, we expect US banks’ NIM and RoE to decline in 2020 and 2021 due to stress on their profitability caused by the near-zero rate.

The COVID-19 pandemic has put economies in very bad shape, and they are likely to remain so for a long time. Many countries and regions, including Japan, Germany, the Eurozone, Denmark, Switzerland and Sweden, have had negative-yielding government debt for some time. However, we cannot say for certain that negative interest rates have been successful in boosting their economies.

The Fed plans to maintain the Federal funds rate at 0-0.25% and not cut it to below 0%. However, if the economic situation does not improve in the next couple of years and we see lengthy periods of deflation and an increase in the unemployment rate, the Fed may opt for negative interest rates. The case is the same with the BoE. However, it may take a few months to see the implications of these actions. It also cannot be established whether the negative rates will be measurably able to revive economic activity and boost exports.

Acuity Knowledge Partners has rich experience in supporting investment banks in the US and Europe. We offer M&A-, debt- and equity-related solutions to onshore bankers. We have dedicated debt and loan syndication teams to help clients with issuance and re-issuance related to bonds and other debt. This helps them focus on pitching and negotiation, while we take care of research and analysis. 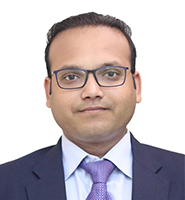 Madhav Garg has over 5 years of experience working across various roles in the Investment Banking team. Currently, he supports in the debt capital markets team for a U.S. based investment bank, with a focus on issuance and re-issuance of high-yield debt across various sectors. He is CFA Level 2 cleared and holds a Master’s degree in Business Administration in Finance.

Recent events in the world have had geopolitical ramifications and effected high economic ....Read More

The year 2019 was definitely a year of locks and downs. While the global economies were pu....Read More

The private sector was not spared from the effects of the pandemic. Although private equit....Read More

Impact of COVID-19 on US high-yield debt