Published on October 29, 2021 by Ravinder Nagar

The Mines and Minerals (Development and Regulation) (MMDR) Act was passed in 1957 to regulate India’s mining sector, and it remained in force for more than half a century without any major changes. In 2015, the newly appointed government overhauled it, replacing it with the Mines and Minerals (Development and Regulation) Amendment Act 2015, which introduced mining auctions as a new method of allocating mines. Its objective was to create a competitive environment and enable transparency in the mining sector. The amended act came into effect on 12 January 2015.

Blocks of major minerals are now allocated through e-auctions to ensure greater transparency and limit discretion in the grant process, as mandated by the MMDR Amendment Act 2015. The e-auction process lays the foundation for “ease of doing business” in India’s mining sector.

The bidding process is made up of two stages:

Stage 1: Technical bid and initial price offer (IPO): At this stage, the eligibility of interested bidders is assessed based on their IPOs. This stage comprises the following steps:

The preferred bidder has to sign a lease agreement with the state government and submit all expense records before becoming a mining lease owner. This entails maintaining a minimum level of production.

Of the 255 blocks of non-fuel minerals put up for auction, 97 have already been allocated to mining companies. Iron ore is the only commodity with 41 blocks already allocated. However, the government has to auction the remaining working leases to maintain production at the same levels as before the expiry of these leases.

A total of 46 working iron ore mining leases expired on 31 March 2020, leading to the closure of the merchant mines. The largest impact on mineral production was from expired mineral blocks in Odisha, Karnataka and Chhattisgarh, which together accounted for almost 80% of iron ore supply in India. Of these, 19 mines have been auctioned and leased in Odisha, and 10 mines have already started production. Karnataka has also executed four mining leases, which have started production. 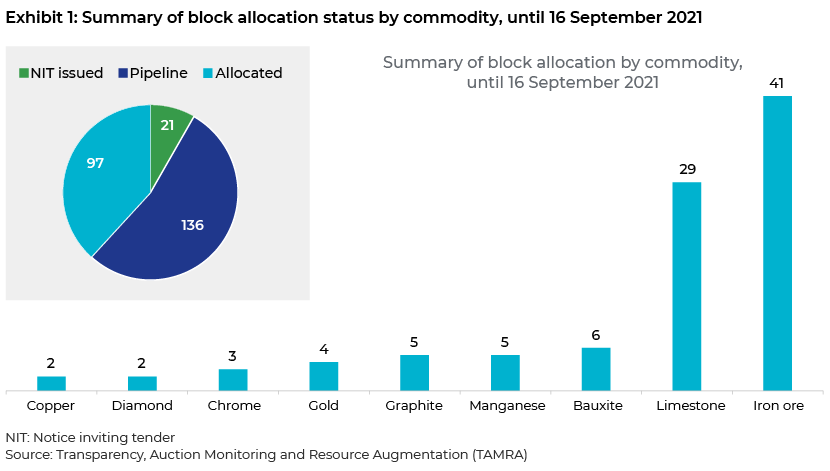 According to the auction process, a mining company has to place the highest bid if it is to win a block. This would have a direct impact on the final cost of iron ore, which is already set to rise 30-40% for non-integrated steel companies. Bidders have to commit a portion of their realised iron ore sales as a premium to the government at the time of bidding. 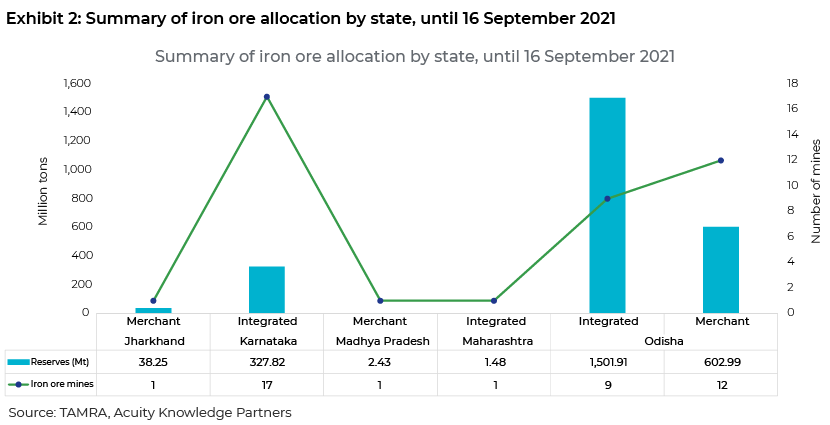 As Exhibit 2 shows, integrated players (companies that own steel plants) won around 65% of the 41 mines allocated until 16 September 2021. Merchant miners are currently facing the heat of these auction processes and are being forced to bid at higher rates, since they are competing with major integrated players. This has affected the participation of smaller companies in the mining sector and has made the operations of these companies unsustainable. A few (mostly merchant) miners recently surrendered their leases citing reasons such as low-grade ore, logistical constraints and the inability to sustain operations due to the higher bid prices.

Odisha accounts for more than 51% of India's iron ore supply. However, the pace of mine allocation is slow. In Karnataka, since the government capped iron ore exports, only integrated players have been winning auctions lately.

Additionally, it takes five to seven months just to complete the auction process before starting mineral production. The state government has taken the initiative to auction certain mines before their leases expire, to reduce the impact on mineral supply, as production halts after leases expire. However, because it failed to do this for all operating assets, it led to a supply disruption.

Rising iron ore costs after auctions place a heavy financial burden on non-integrated players, as they have to potentially absorb 5-10% of the rise in costs. Companies now need to work on strategies to recalibrate post-auction costs to make operations sustainable.

On the other hand, existing steel companies with captive mines would see only a 5-8% rise in iron ore costs after auctions.

The central government amended the MMDR Act in 2021 to resolve issues related to delays in mine auctions by auctioning non-fuel minerals in the event state governments fail to auction mineral blocks within the stipulated time.

While the introduction of the e-auction process has benefited the mining sector in many ways, it will likely take a few more years for the amended MMDR Act to achieve its objectives of making the process transparent and creating a competitive environment in this capital-intensive sector.

We provide in-depth analysis in the metals and mining domain, covering the entire value chain – from mining and processing to monitoring products in the downstream subsector. We understand commodities – from the mining stage to commodity studies and financial analysis. We also have extensive regulatory knowledge and have conducted impact studies in the mining ecosystem. 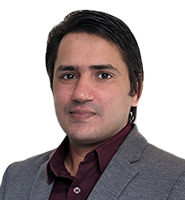 Ravinder has an experience of more than 8 years in Mining, Energy and Transport sector. He worked on in-depth research projects for various commodities such as Iron Ore, Phosphate, Uranium, Lithium, Tantalum and Potash and have knowledge of financial and operational costs analysis, market drivers, mining asset mapping, competitive analysis and market entry strategies.

He worked for global clients on various assignments such as market entry strategies, demand outlook and country outlook.

Ravinder has an MBA with specialization in Power and Energy from the University of Petroleum & Energy Studies and Bachelor’s of Technology (B.Tech) in Mechanical Engineering from Krishna Engineering College.

We have seen a number of developments in Afghanistan recently, after the US announced with....Read More

Innovation has changed significantly the way we work, shop and pay for goods. Sellers and ....Read More