Until recently, India’s online gaming industry was unexplored territory. Digital gaming was largely enjoyed using expensive consoles – the toys of a select few. However, the country has now not only taken to online gaming in a big way, but also become the second-largest market for mobile gaming (based on app downloads), ranking among the top five mobile gaming countries in the world. With a projected user base of 628m+ gamers in 2021, the country’s nascent industry is witnessing exponential growth. Google-KPMG expects the market to be worth USD1.1bn in 2021; investment bank Maple Capital Advisors expects this to reach USD3.8bn by 2024.

Growth has been driven by the collective efforts of the entire gaming industry’s ecosystem and the development of digital infrastructure in the country. The 400+ game-developing companies/start-ups have surpassed console-based gaming platforms. They are now offering quality and deploying localised gaming content that can be conveniently accessed on mobile phones, adding a significant user base of tech-savvy gamers primarily in the 18-24 age bracket who account for 60% of online gamers. Investors, both foreign and domestic, have responded to the growing demand, investing USD450m+ in the gaming industry over 2014-20 and more than USD550m in the first six months of 2021. The industry is also witnessing IPOs; India-based diversified gaming and sports media platform Nazara Technology’s IPO saw its shares list on the Bombay Stock Exchange at a premium of 81% in March 2021.

The nationwide lockdown in 2020 fuelled further growth, with consumers turning to gaming in a big way while being restricted to the home and unable to participate in outdoor entertainment. One of the leading online gaming platforms witnessed a 200% increase in its user base with about 100,000 new users joining the platform on a daily basis. This prompted even offline platforms such as physical casinos to switch to online platforms. 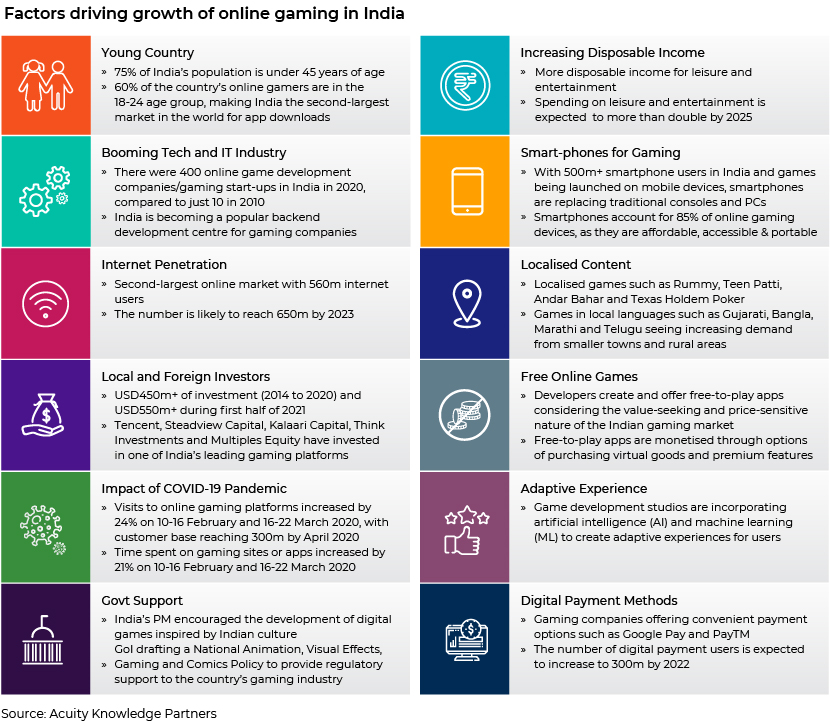 The regulatory ban on major international online gaming companies also paved the way for the development and growth of local companies. It presented an opportunity for local gaming companies to step up their development capabilities and build games in multiple local languages and along customised themes, in line with local demand. The government of India, in line with its “Atmanirbhar Bharat” programme aimed at making the country self-sustaining, is also promoting game-development studios and peripheral companies developing digital games inspired by Indian culture.

While the industry has grown phenomenally so far, the next level of growth is highly dependent on a well-defined regulatory framework. India currently does not have a unified law governing online gaming; each state is authorised to have its own laws. Most states still follow the pre-independence Public Gambling Act of 1867, not comprehensive to govern modern online gaming. The act also has a number of grey areas, with the definition of “skill-based gaming” open to interpretation. The country still depends on past rulings to interpret whether a particular online game falls within the ambit of skill or not. For example, while horse betting and fantasy sports are usually permitted under most laws, games such as online Rummy and Poker are deemed to be games of skill in some Indian states, while being prohibited in others, hampering the steady growth of online gaming platforms.

To ensure sustainable growth of online gaming companies and investors in the long run, we believe it is time the industry makes a concerted push for relevant, new and centralised regulation as an alternative to multiple state laws (for example, pay-to-play online gaming formats are currently banned in Assam, Odisha, Telangana, Andhra Pradesh, Tamil Nadu, Kerala, Nagaland and Sikkim). In the long run, it is better for gaming platforms to be regulated and monitored closely rather than face arbitrary and selective bans. Steps have been taken in this direction with public policy think tank NITI Aayog releasing draft guidelines on uniform national-level regulation for online fantasy sports platforms in December 2020. However, the online skill gaming industry has collectively asked the NITI Aayog to set up a single self-regulatory body to standardise regulations governing the entire skill gaming industry and not just fantasy gaming.

India’s gaming and gambling laws are likely to be overhauled this year, not only benefitting the gaming platforms, but also increasing the country’s online gamers base. The regulated market is estimated to generate over USD1.4bn in direct and indirect taxes annually for the government by 2025, in addition to generating thousands of jobs.

Acuity Knowledge Partners is an experienced research and consultancy firm that assists online gaming and streaming platforms across the globe. With our team of subject-matter experts, we provide our clients with customised research in areas such as market sizing and attractiveness, understanding the latest trends and developments in the sector and competitor analysis, enabling them to stay ahead of the competition and ensure continued growth.

2020: The up and coming year for Indian gaming industry! – Hindustan Times

Online gaming industry in India is expected to grow at a CAGR of 47% by FY22: Study – The Financial Express

Online gaming: How the pandemic has shaped the future of e-gaming in India | The Financial Express

India’s Digital Economy: Why Online Gaming Is A New Growth Driver In The Making (swarajyamag.com)

Should online gambling in India be regulated? – The Hindu

Advocates’ Association calls for ban on online gaming – The Hindu 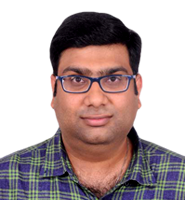 Rahul Kajla has over 11 years of experience in the research and consulting industry. He currently works in the Strategy Research and Consulting practice at Acuity Knowledge Partners and supports consulting and corporate clients in their research assignments. He is experienced in customized research related to market & competitive intelligence, market assessment, benchmarking, competitive landscape, market entry, partner identification, M&A opportunity in addition to others along with sales support

Regulatory scrutiny of WhatsApp use for business....

While it would seem convenient to share information with just the click of a button rather....Read More

Digital operational resilience for the financial....

The G7 tax proposal: A definitive step on the lo....

In an interconnected world, businesses of all sizes – from multinational corporates to s....Read More

Fintech Firms: A Boon for the Financially Exc

How Blockchain Is Changing Cost and Speed of

Blockchain has been garnering significant attention across industries, with venture capita....Read More