Can SOFR be more than just LIBOR 2.0?

Published on June 29, 2021 by Devin Kandage and Debdutta Mandal and Sriram Kovil

The SOFR will replace the USD London Interbank Offered Rate (LIBOR) that has served as the benchmark reference rate for USD borrowings for more than USD200tn worth of (notional) financial instruments such as loans, mortgages, derivatives and securitisations. This means the publishing of LIBOR would cease. This is in line with the process to replace key IBOR-linked benchmarks in regions such as the UK, Switzerland, the Eurozone and Japan with similar overnight reference rates. The rates proposed are the SONIA in the UK, €STR in the Eurozone, SARON in Switzerland and TONAR in Japan, each with its own characteristics (for example, the SOFR and SARON are based on secured transactions). 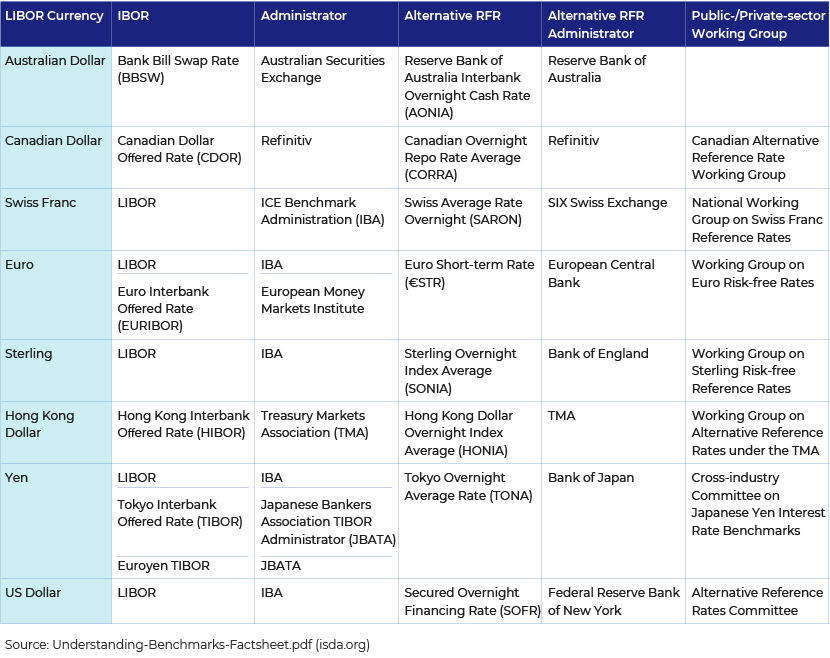 The SOFR is a rate based on overnight transactions in the US Treasury repo market, the largest rate market in the world at a given maturity.

The SOFR has a number of characteristics that differentiate it from LIBOR:

The issues with LIBOR

LIBOR has attracted negative press due to scandals surrounding bankers manipulating the rate to benefit their own positions. We must take into account that LIBOR is based more on judgment and internal models than on the underlying transactions.

LIBOR submissions have significant subjectivity when each contributor bank is required to produce a rate to reflect wholesale unsecured funding rates between banks. The ICE LIBOR weekly report shows the transparency with different levels of information used to contribute to deciding the rate over different tenors.

Definitions as reported in the ICE LIBOR weekly report

Level 1 : The LIBOR submission is equal to the volume-weighted average price of eligible transactions in unsecured deposits, primary issuances of commercial paper and certificates of deposit, with a higher weighting for transactions booked closer to 11:00 a.m. London time.

Level 3: Where a contributor bank has insufficient eligible transactions or transaction-derived data to make a Level 1 or Level 2 submission, the LIBOR submission is the rate at which it considers it could fund itself at 11:00 a.m. London time with reference to the unsecured wholesale funding market. In order to determine this rate, the contributor bank must follow its internally approved procedure agreed with the IBA, basing its rate on transactional data, related market instruments, broker quotes and other market observations.

This shows the fragility of the rates and how they could be manipulated to help benefit the panel banks with respect to their positions taken in derivatives markets or to show how good their financial standing is2 . This gave rise to the need for an alternative rate that would be rooted in financial transactions and not in subjectivity and internal models, one that could not be manipulated by any one financial institution. The Alternative Reference Rate Committee (ARRC) was formed in 2014 to help identify a rate that was transaction-based and derived from a deep and liquid market. The ARRC selected the Secured Overnight Funding Rate (SOFR) to replace LIBOR. 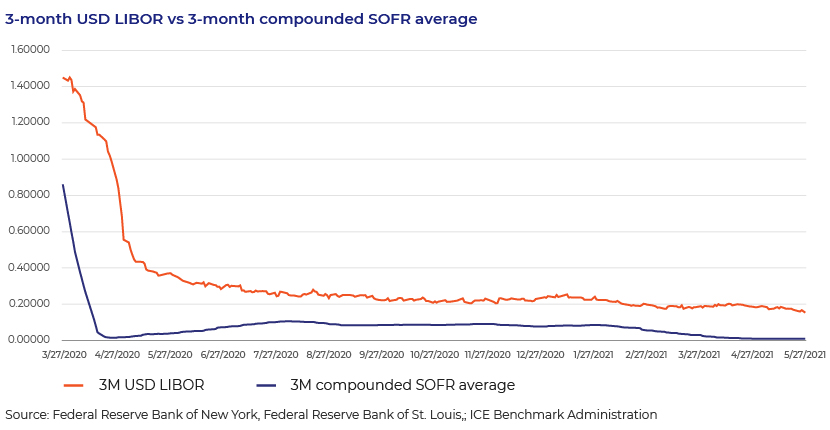 How is the SOFR calculated?

The day’s SOFR is calculated as the transaction-weighted median repo rate from the following data:

This method of calculating the rate offers three advantages:

1. It is a more robust statistic

2. It produces the interest rate that has been observed

3. It is in line with the calculating methodology for the daily effective federal funds rate (EFFR) 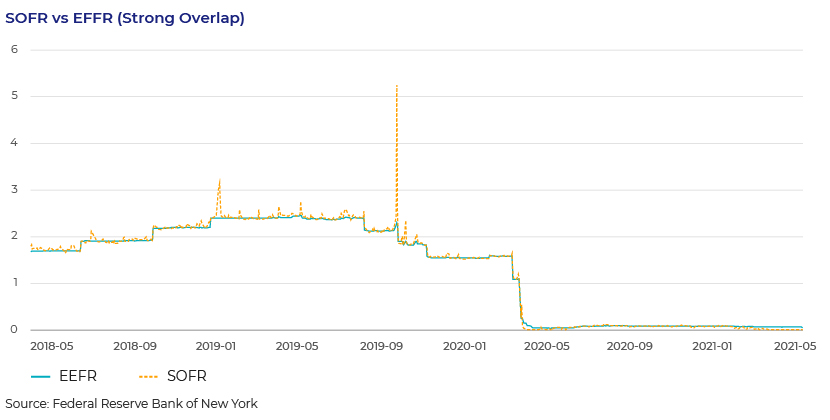 The chart above shows that the SOFR tracks movements in key policy rates such as the federal funds rate reasonably well, indicating the stability of the SOFR. It also shows that the SOFR is a much more volatile rate, attributable to conditions in collateral markets and dealer balance sheet management.

There is also occasional quarter-end volatility arising from banks’ balance sheet adjustments in connection with their reporting of Basel III leverage ratio components. Institutions that publish quarter-end reports will reduce their repo borrowing around this time as they shrink their balance sheets, and those institutions that report daily averages over the quarter will either keep the same level of activity or, perhaps, increase their activity to meet demand3 .

Although the use of overnight rates may seem to be “new”, there is a long history of their use in financial products. In the US, there are futures that reference the EFFR, and these have traded for more than 30 years; OIS referencing the EFFR have traded for more than 20 years. In addition, banks in the US have offered loans on a prime rate (the federal funds overnight rate serves as the basis for the prime rate).

When using overnight rates, most financial products will not use a single day’s reading of the rate but some kind of average of the overnight rate to determine the floating-rate payments to be paid or received.

Why use an average of the overnight rate? 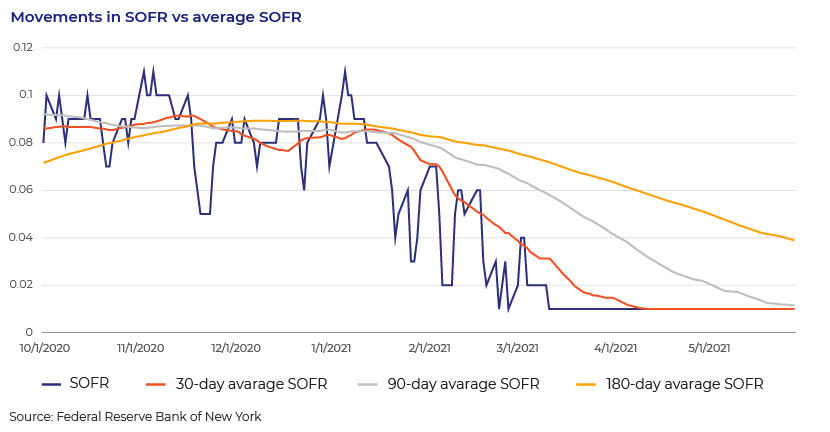 The way ` technical choice in how they wish to average – using either the simple or the compound average.

Simple interest computes the amount of interest owed each day by applying the daily rate of interest on the money borrowed, and the payment due at the end is the sum of those amounts (formula taken from the ARRC Guide to SOFR):

In the US, most floating-rate notes and loan systems are already set up to use simple interest, but the ARRC believes it would promote liquidity and better market functioning if market participants use compound SOFR over time.

The existence of these two conventions means there is a tug-of-war between borrowers and lenders/investors. An “in advance” structure would be favoured by borrowers, as they would know their payments ahead of time. An “in arrears” structure would be favoured by lenders/investors, as they would like their returns to reflect what actually happens over the interest period and would view an “in advance” structure as being “out of date”.

To allow for advance notice of payments under an “in arrears” framework, a set of conventions has been developed. For an “in advance” framework, a decision on the period over which to calculate the averaged overnight rate would have to be made.

For “in arrears”, there are a few conventions:

Plain: The average SOFR over the current interest period is calculated and is paid on the first day of the next interest period. This structure would refer to the actual average over the full interest period. Given the delay in publication of the SOFR, this would mean the payment would have to be made on the same day that the final payment is known.

Payment delay: The average SOFR over the current interest period is calculated, and the payment will be made t days after the start of the next period (OIS swaps use a payment delay to settle T+2 days later). As OIS swaps use this kind of payment delay, hedging using OIS swaps would help reduce the basis risk. The movement in interest over the period would be more accurate and give more time for payments to be made. However, some participants may not prefer it, as it may introduce payment/cash flow mismatches with other payments/cash flow.

Lockout or suspension period: The latest rates would be fixed t days before the period ends to calculate the average SOFR. This structure would skip over n days of rates on each period and this might be significant, as the SOFR can change daily.

Lookback: For every day in the interest period, take the SOFR rate n days prior. It is also termed “a lag” or “backward-shifted rate observation”. A compound average in arrears with lookback has the same floating structure as an OIS with a payment delay, so it can be easier to hedge.

For “in advance”, there are two sets of conventions (definitions taken from the ARRC Guide to SOFR):

To construct a forward-looking term rate, we would need an objective rate based on market data that reflects the expectations of market participants for changes in interest rates. A possible way would be to use the term Treasury repo market, but this market has insufficient depth compared to the overnight repo market underlying the SOFR. As a result, the rate constructed using the term Treasury repo market may not be robust or IOSCO-compliant.

To build a forward-looking term rate, SOFR futures contracts would be used. The working paper published by Federal Reserve economists Erik Heitfield and Yang-Ho Park is used as the basis for the term SOFR calculated and published by the CME Group4 . On 21 May 20215 , the ARRC released an update on its RFP process to select an administrator for a forward-looking term SOFR; it has identified the CME as term rate administrator.

The term SOFR would be an important requirement for participants who need to know the rate and payment in advance, and would be particularly important to those who operate in cash markets.

A key point to emphasise is that forward-looking term rates are segments of the underlying SOFR-OIS curve. An OIS involves the exchange of a set of fixed-rate payments for a set of floating-rate payments between two parties. The fixed rate will be set at the start of the period, whereas the floating rate will be an average of the overnight rate over the period. The fixed rate would be the rate the receiver demands in exchange for the uncertainty of the floating rate over the period. It is effectively a forecast of what the SOFR will be over that period.

For now, LIBOR and SOFR will continue to coexist, but with a permanent cessation date (31 December 2021) for some key IBORs and their respective term settings; this means that LIBOR would no longer be representative. With the ARRC publishing progress reports, most of the fallback language in place and the methodology with respect to calculating spread adjustments finalised, firms should take inventory of all contracts referencing LIBOR, update the contracts with the amended fallback language and reference the SOFR and not LIBOR for any new issuances to avoid consequences such as legal or regulatory disputes and reputational risk of using a non-representative benchmark.

2 Behind the Libor Scandal – Graphic – NYTimes.com

Federal Register: Request for Information Relating to Production of Rates

The date is locked in: FCA and IBA’s announcement on LIBOR cessation (pwc.com) 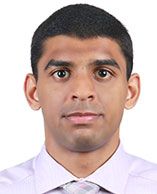 Devin Kandage is a senior associate within the Specialised Solutions team at Acuity Knowledge Partners. He has over three years of experience in quantitative research, working with a diverse group of clients, spearheading process automation, supporting a benchmark index provider by conducting research on emerging market bond liquidity, supporting investment research through investment and technical analyses in addition to several other ad-hoc projects that include data cleaning, web scraping and training incoming quants analysts. He has a first class degree in Economics and Finance from the University of London. He is also a CFA charterholder. 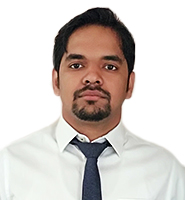 Debdutta Mandal is an Assistant Director in the Specialized Solutions team at Acuity Knowledge Partners. He has 7 years of experience working as a quant developer and a quant analyst. He leads the team which works with banks providing supports for financial market risk analysis, model research/enhancements, derivative pricing and developing financial automation tools. Debdutta holds a Master’s Degree in Quantitative Economics from Indian Statistical Institute. 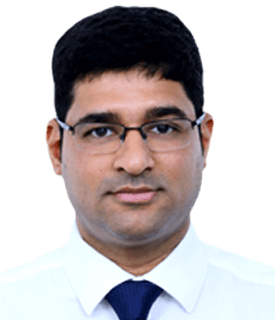 LIBOR fading away, SOFR emerging to lead the way....