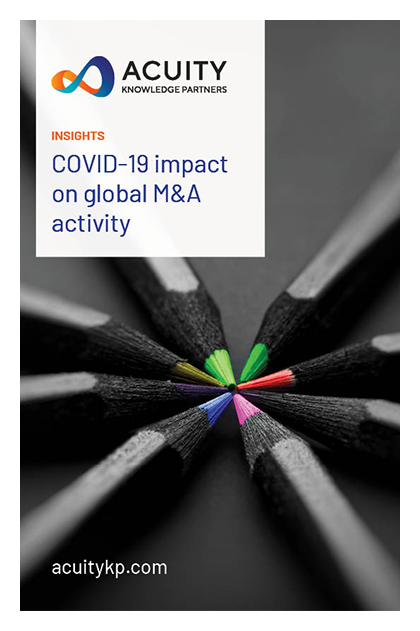 The COVID-19 pandemic has become one of the biggest threats to the global economy and financial markets. Understandably, mergers and acquisitions (M&A) declined rapidly in 1H 2020 (both in value and volume) as companies focused on protecting their balance sheets and even more on liquidity. The aggregate value of announced and closed deals was USD1.2tn in 1H, 41% lower than in the same period a year ago and the lowest first-half total since 1H 2013. This steep fall resonates with those in recent economic down-cycles – including the dot-com bubble, the 2008-09 financial crisis and the 2012 European debt crisis – when companies gave up on expansion plans and adopted a conservative approach. However, companies are likely to recover more quickly from the current downturn than the previous ones, as this one was not driven by cyclical or fundamental factors.

The paper helps us to understand the current global M&A landscape, where drops in volume are mostly due to a lack of larger M&A deals, whereas smaller transactions continue as players dispose of non-core assets and troubled companies seek consolidation as a way out. The financial, industrial and technology sectors led the global M&A sector mix in 1H 2020 and geographic insights.

The paper also discusses the outlook for the M&A market, which is likely to be positive in the medium and long term owing to the substantial amount of dry powder available, the favourable low interest rate environment and access to financing, coupled with a likely decrease in record-high valuations.

Get your free copy