Published on November 12, 2013 by Chanakya Dissanayake

One of the most fascinating aspects of the investment research support we provide for global investment banks is the diverse nature of the companies we are asked to study. No two firms are the same, and at times, you come across a particularly tricky candidate. For instance, how do you value a technology company in the early stage of its existence, offering a product in an early-stage industry, with no direct comparable peers? We were faced with this interesting question when one of our long-standing investment bank clients asked us to develop a valuation thesis for a company fitting the profile. The company, which we can broadly define as into power solutions, was yet to break even, but was generating a lot of interest due to its early entry into a promising sector.

It was a unique scenario for multiple reasons and required an out-of-the-box thinking approach from our end. We realized it would be meaningless to use conventional relative valuation by finding listed proxies, as the entire industry was just coming into being. Furthermore, the company’s flagship product was one of a kind due to the specific raw materials and proprietary technology used.

We looked instead to the methods of early-stage company valuation discussed by Prof. Aswath Damodaran. Damodaran agrees that it does become increasingly difficult to value companies that move away from the standard script of money-making behemoths with a long history, where forecasting earnings and cash flow is more straightforward. However, he reminds us that when required to value tricky companies, intrinsic valuation methods such as the discounted cash flow (DCF) should not be abandoned. Instead, we should be more creative and flexible in the use of DCF to value the company in question.

Inspired by Damodaran, we decided to do a multiple scenario-based DCF valuation to arrive at a target price for our early-stage company. In order to carry it out, we needed to first determine the key variables that could affect the company’s future success, or conversely, its potential demise. We realized that for this company, the biggest cause for concern was the adoption rate of its technology. Although the company had taken the necessary steps to market and distribute its products, we had to ask ourselves, would consumers pick this version of the technology over other substitutes out there? We did a comparative study using metrics such as cost, lifetime, safety of use, and ease of replacement, and realized that in the markets specifically targeted by the company, it had the best solution in terms of lifetime, cost, and convenience. Furthermore, we found it favourable that the company had thought-through the downstream investments it needed to make in order to build a scalable platform that could reach out to a larger customer base.

We then used a multiple scenario analysis to arrive at our target price, with each scenario factoring an adoption rate. Based on the adoption rate, we forecasted potential volumes which eventually drove revenue and profitability. We looked at growth trajectories of industries that have gone through similar lifecycles to further back our growth assumptions. Based on the revenue generating potential in each scenario, we determined the company’s re-investment needs and arrived at the free cash flow generating potential for shareholders in the longer-term. In order to arrive at our weighted average cost of capital (WACC), we used conservative assumptions, factoring the high risk involved with the company’s business model and a potentially low terminal growth rate.

Once we arrived at a DCF-derived intrinsic value for each scenario, we assigned a probability factor. In the case of this company, we expected that our base case would have a 50% chance of materializing while we expected an equal probability for a worse-than-expected and better-than-expected scenario. Our weighted target price thus represented a value for the company that incorporated the inherent risks of the business model.

The work that we did generated positive feedback from our client. Through this experience, we learnt that when valuing a non-conventional company either in the early-stage of its existence, or in other scenarios such as divestures, mergers, or distressed situations, it’s important to take a step back and determine which method of valuing the company is most appropriate. It’s also important to refer to published information out there, such as the work by Prof. Damodaran, to see what has been considered appropriate in previous situations. As we learnt, it does require you to be creative and flexible in your search for the likely value of the firm. And as always, back your valuation with a strong, economically defensible thesis and you will have the crux of a sound investment case covered. 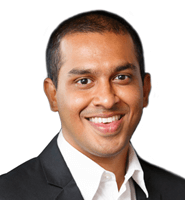 Chanakya has sector coverage experience in Financial Institutions and Telecommunications. He is a CFA charter holder, an Associate Member of CIMA (UK), and a Fellow Member of ACCA (UK).

Forensic analysis – a sustainable source of

Ever since the investment analysis industry was founded in the 1930s, experts have debated....Read More

Glancing at the rear view mirror does help

How often do we hear that the historical financial statements of companies represe....Read More