Published on November 13, 2017 by Subhrojyoti Mandal

After the global financial crisis, the US Federal Reserve (Fed) maintained low interest rates to drive an economic rebound, support asset prices, and to allow banks to strengthen their balance sheets and reduce non-performing loans. In this discussion, we evaluate the effect of sustained low interest rates on banks’ commercial and industrial (C&I) loan portfolio growth and try to identify the headwinds that have been driving a further decline in the loan growth rate in recent quarters.

We observe that credit offtake was slow to respond after the recession, despite a sustained low interest rate environment from 2010-2013. A recent concern is the further decline in the loan growth rate from 3Q2016 to 1Q2017.

The graph shows that C&I loans were more elastic to interest rate changes immediately after the recession, dropping and rebounding much faster than the overall loan growth rate. However, the C&I loan growth rate experienced a similar slowdown at end-2016 and in the first quarters of 2017.

The Fed’s Senior Loan Officer Opinion Surveys on Bank Lending Practices over the past three quarters indicate regarding C&I loans that a modest percentage of banks have increased the overall size of their credit lines. In addition, a moderate percentage of banks have narrowed the spreads between lending rates and cost of funds and have relaxed certain applicable loan covenants to drive growth. Some banks have also decreased the use of interest rate floors. Most banks who have eased their credit standards have done so on the back of increased competition, increased risk tolerance, improvement in capital position, and improvements in industry-specific challenges. Available liquidity in the secondary market has also contributed to the easing of credit standards.

Loan supply data helps to ascertain whether banks have withheld credit to businesses, resulting in tepid loan growth. As the following graph shows, the net percentage of domestic banks tightening their standards for extending C&I loans to large- and middle-market firms has remained on the lower side. This indicates that credit tightening has really not occurred. In contrast, the Fed’s Senior Loan Officer Opinion Survey points to a modest number of banks increasing their size of credit lines, thereby increasing supply.

US businesses have witnessed several mild shocks since the economic recovery, including a slowdown in the healthcare sector stemming from reimbursement rate cuts and regulatory uncertainties, weakness in the metals and mining sector since 2013, continued softness in oil prices, a competitive threat to brick and mortar retail from e-commerce, and China’s slowdown. The real US GDP growth rate has averaged 2.1% since 2009 and was 2.6% in 2Q2017. Real GDP trailed potential GDP, indicating a continued output gap from what the economy was capable of generating. This has led to underutilization of businesses’ productive capacity.

The above chart indicates that capacity utilization has not picked up to pre-recession levels. Utilization has been below 80% in the past several quarters. Businesses have therefore taken a cautious stance toward growth capital expenditure, limiting their demand for borrowed funds. Corporate profits have also not grown substantially to warrant incremental borrowing costs. Furthermore, the market for small-business lending has witnessed the emergence of online marketplace lenders. Small businesses have preferred online marketplace lenders to traditional banks, prompted by the shorter fund disbursement cycle time offered by online marketplace lenders. That said, the big banks have shifted their focus to participate actively in small-business lending, primarily to discourage online lenders from further intensifying competition in a tepid demand scenario.

Softer loan growth is likely due to lower demand from businesses and higher competition rather than banks constraining credit offtake. The sustained low interest rate scenario fails to boost the business confidence index amid such lackluster economic fundamentals. Nevertheless, we believe it will be interesting to watch developments over the coming quarters given the spate of reforms and measures to boost business confidence promised by the Trump administration and the Fed’s actions. 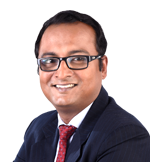 Subhro has over 16 years of experience in Credit Analysis across asset classes. He heads the projects and transition team for corporate and commercial lending domain. He holds a masters degree in commerce and completed Post Graduate Program in Artificial Intelligence for Leaders from UT Austin

Cannabis – the next big financial investment....

Introduction The US categorised cannabis, commonly known as marijuana, as a psychotropic ....Read More