Rise of green and sustainable banking

The Organisation for Economic Co-operation and Development (OECD) defines a green bank as an entity established specifically to facilitate private investment in domestic low-carbon, climate-resilient infrastructure. Green banks are specialised institutions formed to finance projects aimed at protecting and preserving the environment. The projects may include those related to clean energy generation and storage, clean transport and sustainable water infrastructure.

Based on a more sustainable model than statutory funds, green banks enable investments at market rates, ensuring a revenue stream to cover a bank's own costs while preserving its capital base for continued deployment.

Green banks work in collaboration with the private and public sectors to channel their investments towards clean energy markets. They aim to perform the following functions:

The efficiency of green banks in the US

The whole world is impacted by climate change. Many economically crucial states in the US such as Florida, California and Nevada are severely affected by extreme climatic events. Developing environmentally conscious projects can help the US economy with more than just the following:

There are two pioneer institutions in the US in this segment; Connecticut Green Bank and New York Green Bank established in 2011 and 2014, respectively (apart from the 15 more green banks in operation in 2021).

Green banks have made a cumulative investment of USD5.3bn since their inception in 2011, with USD1.5bn invested in the year ending 31 December 2019.

Performance of green banks in the US

The efficiency of green banks can be measured by growth in total assets and revenue in recent years.

Public as well as private entities have been traditionally assessing projects in terms of the risk and return associated with them; related environmental concerns have seldom received due consideration.

The number of entities that acknowledge and adequately adopt the UN’s Sustainable Development Goals has been increasing since the start of the decade. However, to build a planet “healthy” enough to support “healthy” economies, much more needs to be done to remediate the damage already inflicted and avoid further damage.

It is also important to understand that governments and regulatory bodies alone cannot do all that is required to restore and maintain ecological balance. Private entities and individuals need to comply with statutory initiatives to make environmentally conscious projects economically viable and overcome barriers to achieving their core objectives.

Green-banking practices are aimed not only at enriching the environment, but also at ensuring a lucrative emerging business landscape, likely to be more popular among consumers.

Green finance makes for a strong case as a growth avenue for financial institutions, and Acuity Knowledge Partners (Acuity) facilitates a wide range of customised research and analysis. Green banks have actively supported the administration of the Paycheck Protection Program (PPP) managed by the US Small Business Administration. They have helped contractors and those in need of working capital access loans under the PPP. Acuity can also assist green banks in their administration of PPP loans. 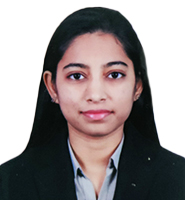 Paridhi is an Analyst in the Commercial Lending division at Acuity Knowledge Partners. Her current role involves financial spreading and analysis for an US-based commercial bank.

She holds an MBA (Finance) from Guru Gobind Singh Indraprastha University, Delhi and has completed her Bachelors in Commerce from University of Delhi.