Published on February 3, 2022 by Ankit Agrawal

The FY23 budget continues to provide support to India’s slow economic recovery from the pandemic. The government estimates that GDP will grow 8.0-8.5% in FY23 vs 9.2% in FY22. The government projects a moderate increase in expenditure of 4.6% over the FY22 revised estimates. The quality of spending is improving, with Capital expenditure accounting for 19% of total spending in FY23 vs 12% in FY21, while spending on subsidies declines to 8% in FY23 vs 20% in FY21. The government has now pegged a fiscal deficit of 6.4% GDP vs 6.9% in FY22.

The fiscal calculation seems to be conservative

The fiscal deficit is expected at 6.9% of GDP in FY22 and to consolidate further to 6.4% by FY23. For FY23, the government projects conservative gross tax revenue growth of 9.6% vs nominal GDP growth of 11.1%. The forecast for non-tax revenue of INR2.7tn (ca USD36bn) is below the INR3.1tn (ca USD42bn) for FY22, due to a reduction in estimated dividend revenue from the Reserve Bank of India (RBI) and public-sector enterprises (PSEs). Disinvestment proceeds are expected at INR650bn (ca USD9bn), down 17% y/y. Nevertheless, an upward revision of divestment proceeds is likely if the government completes the sale of Bharat Petroleum Corporation Ltd (BPCL) and IDBI Bank, among others, in FY23.

The lack of progress made on listing Indian government bonds on the Euroclear platform and the resulting delay in their inclusion in global bond indices will likely increase the government’s funding costs. Large market borrowings are expected for FY23, along with reviving the credit growth cycle, and the RBI stopping deficit financing will likely result in higher interest rates for domestic funding.

Bond spreads widen while the equity market ends in green

The bond and currency markets reacted negatively to news of higher-than-expected market borrowing of INR14.95tn (ca USD200bn) in FY23 vs INR12.1tn (ca USD160bn) in FY22. The 10-year bond yield was up ca 20bps, while the 5-year bond yield, which anchors corporate borrowing costs, rose ca 12bps. Upside risk to the sovereign bond yield remains, as the RBI is likely to continue offloading government bonds in FY23 to absorb excess liquidity, credit growth is likely to be revived and policy rates are likely to be normalised in the near to medium term.

However, the equity market, although volatile, closed on a positive note, with the benchmark SENSEX and NSE indices closing 1.45% and 1.37% higher, respectively. Key beneficiaries could emerge in sectors such as cement, building materials, affordable housing and clean energy and manufacturing – on the back of production-linked incentive schemes. 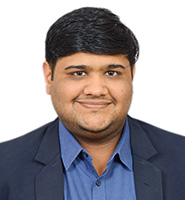 Ankit Agrawal has close to nine years of experience in fixed income credit research, with a focus on bank, sovereign and corporate credit reviews. He has worked with three of the largest buy-side firms based in Europe and the US, assisting with investment decisions. He is actively involved in daily morning meetings, discussing themes and issuer updates, and is adept at writing detailed credit reviews and building detailed financial models to present his investment case. Ankit holds a Master of Business Administration (Finance) from Symbiosis International University.

Fallen angels: Diamonds in the rough?