Published on October 12, 2021 by Amit Manchanda

China stocks have been in the eye of the storm since domestic regulatory tightening started late last year, apparently triggered by Jack Ma’s public criticism of the country’s regulators. Concerned about the growing power of their largest technology companies, the Chinese authorities started an array of antitrust and antimonopoly proceedings – an activity that has grown in terms of intensity and scope, spilling over to other industries and adversely affecting the equity markets, and showing no signs of abating. The US’s push for increased disclosures from Chinese firms listed on its bourses seems to have added fuel to the fire. The Holding Foreign Companies Accountable Act was signed into law in December 2020 by then US President Donald Trump. The regulation is geared towards removing Chinese companies from US exchanges if they fail to comply with American auditing standards for three years in a row. Sentiment worsened further as the Biden administration continued with the hardline stance towards China. This reinforced the Chinese authorities' resolve to make their US-listed home-grown tech majors fall in line lest they share access to important digital assets with the US authorities under pressure. 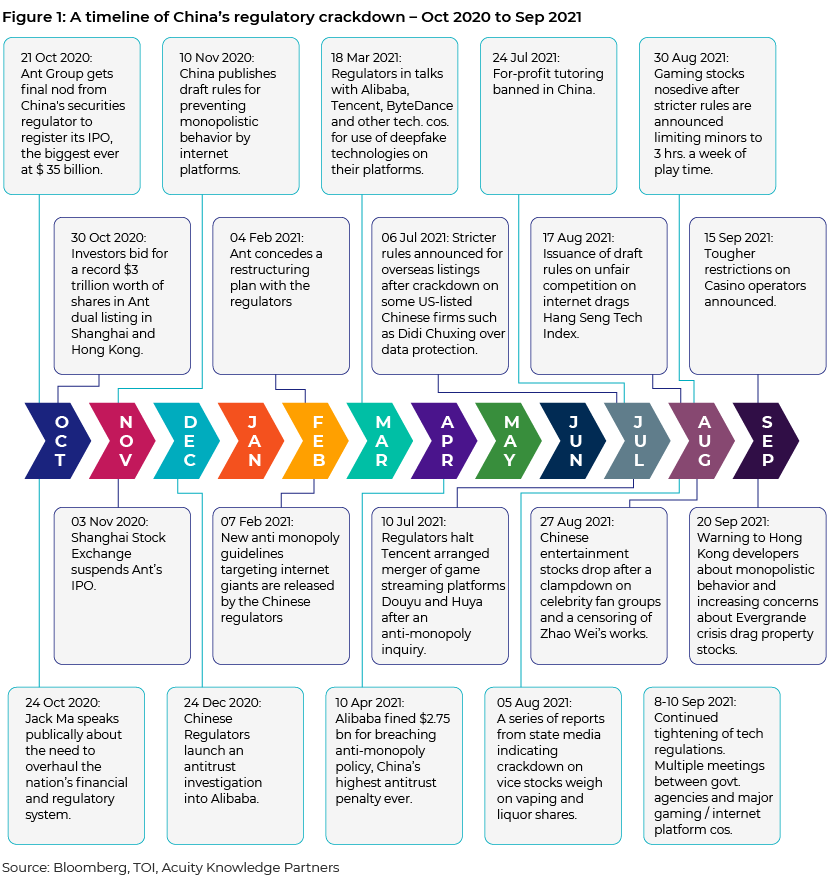 As a result, the MSCI China Index, which mostly comprises large- and midcap stocks, has corrected more than 30% (as of 30 September 2021) from its February peak. 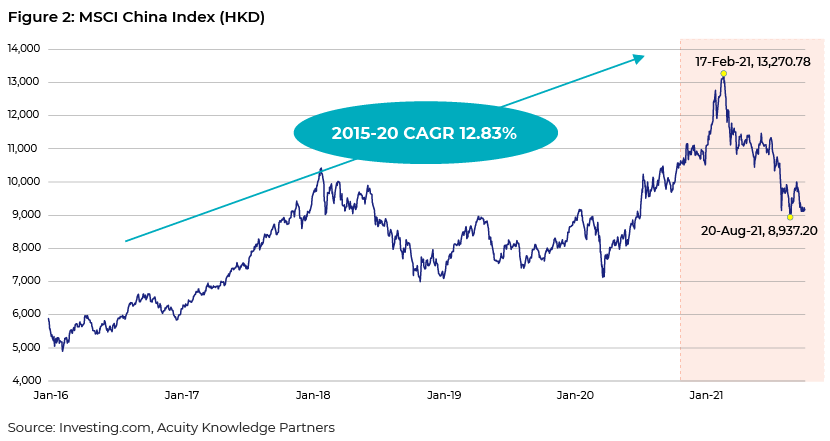 China has the largest GDP globally in real terms (based on purchasing power parity [PPP]) and the second largest in nominal terms after the US. It comprised 13.04% of the global market capitalisation in 2020 and 4.05% of the MSCI ACWI Index (among the leading global equity indices) as of 31 August 2021. The country’s real annualised economic growth ranged in the low-double-digit and high-single-digit percentages in the first and second decades of the century, respectively, and is expected to remain north of 5% through 2025 . However, even as China has gained in prominence in recent decades, many investors have been wary of allocating funds to China due to the lack of free and fair market characteristics (such as high government intervention, poor IP protection and suboptimal financial reporting standards), increased trade and geopolitical frictions, and de-globalisation.

Despite the risks, a commensurate China exposure is inevitable for a portfolio positioned to leverage the new global balance. The potential for further opening up and reform of China’s capital markets over the next few years should help increase investor comfort in owning Chinese assets. A recent move by BlackRock, the world’s largest asset manager, to set up the first wholly owned foreign mutual fund subsidiary in China exemplifies this. Moreover, the recent steep correction in areas such as technology, education, property, gaming and vaping provides an opening into many fundamentally strong businesses at inexpensive valuations. 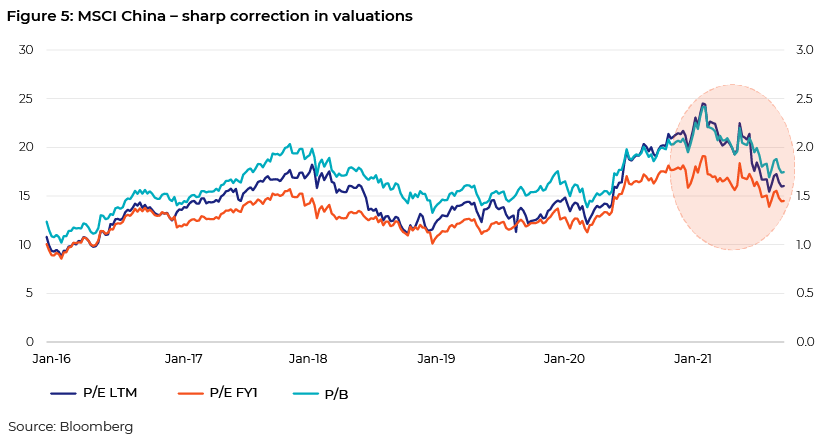 In addition to data protection, concerns about equality of opportunity, consumer rights and monopolistic practices are major drivers of the aforementioned Chinese regulatory intervention. While the endeavour to safeguard domestic data at the cost of higher corporate transparency seems to be aimed mostly at strengthening the government’s stronghold (via key areas of modern economics such as big data, data analytics and artificial intelligence), much of the intervention in other areas seems to be logical and in the larger interest of the public. These concerns are similar to those of lawmakers in the US or other major financial centres around the world. What has been surprising about China, though, is the pace of rollout and high-handed enforcement that does not seem to be abating. Hence, high volatility in individual stocks cannot be ruled out in the short term. However, the heavy-handed regulatory blitz cannot continue unabated for long with a large, diversified basket of carefully chosen businesses, unless China wants to permanently stifle or kill its innovative home-grown businesses. Elements of geopolitical tension and exchange rate fluctuations add to the volatility that is possible in the near term. Investors would inevitably need to have a long-term horizon and the ability to ride out the higher levels of volatility while trying to capture potential returns.

We have been present in Beijing since 2009 and currently have over 150 analysts (MBAs, CFAs and accountants) proficient in Mandarin and English. Global asset managers and investment banks leverage our on-the-ground research capabilities in China to drive innovation and efficiencies in their investment research processes and maintain a sustainable edge. 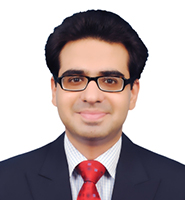 Amit Manchanda has 13 years of experience in financial services, with more than 11 years in equity and investment research support working with both sell- and buy-side organizations (including brokerages, bulge-bracket banks, hedge funds, and asset managers) on engagements spanning across sectors. In his role as a Delivery Manager with Acuity, Amit’s research and interpersonal abilities enable him to collaborate with a variety of professionals, gaining nuanced insights from their combined experience and proficiency. Clients benefit from these insights and analyses, which are leveraged to add novel perspectives to research products such as presentations, blogs, company reports, thematic reports and financial models. Amit holds an MBA in Finance from S P Jain School of Global Management.

Thanks Amit for sharing this master piece. Amazingly written and summarized. Looking forward for more such gems.

Silver lining to the inflation curse