An emerging trend in the global quantitative research space is the systematic determination of personality traits of corporate executives and board members by combining natural language processing (NLP) with the financial domain. The preliminary objective is to analyse background information and biographies of key executives to detect patterns between their backgrounds and the company’s performance. Quantitative models and results of such studies could support inferences that affect an investment manager’s view on a stock position in the event of executive changes. For example, we may observe that hedge funds managed by executives from scientific and engineering backgrounds outperform hedge funds managed by executives from non-scientific backgrounds. Analysis of executive biographies, academic histories and work experience forms the preliminary input to begin analysing patterns between their backgrounds and the company’s performance. We could go a step further and devise metrics to determine the personality traits of executives.

A fair assumption would be that if personality traits greatly affect everyday life, the personality traits of executives would impact a company’s customers and business performance. Academic research in the fields of psychology and linguistics show that NLP could be used to classify the Big Five personality traits from human language text, as Table 1 shows.

Research by El-Demerdash, El-Khoribi and co. 2020[1] shows how through a transfer (deep) learning technique called Universal Language Model Fine-Tuning (ULMFiT), a structure of five independently trained networks can be constructed to identify personality traits from written texts, where each network represents a personality trait.

Survey and research papers of Stajner and Yenikent 2020[2] and Wang & Chen 2019[3] explore the Upper Echelons theory, a management theory by Hambrick and Mason that hypothesises that organisational outcomes are partially predicted by managerial characteristics. For example, the Wang & Chen 2019 paper shows that CEOs with high extroversion and agreeableness and low neuroticism, openness and conscientiousness have a positive influence on their companies’ business performance. Such NLP models could be employed to determine the personality traits of the individuals running a company, providing a proxy indicator to gauge corporate performance.

Another study by Preotiuc-Pietro, Carpenter and co. 2016[4] has gone a step further to identify the “dark” traits of an individual, or more specifically, the dark triad of personality, by analysing 538,712 Twitter posts of 710 distinct users. Such malevolent human traits have been categorised by Psychology Research into three traits, as Table 2 shows.

All three traits share a core set of behavioural characteristics such as hostility or lack of empathy, and represent a short-term view in implementing strategy; these are not ideal traits for executives to have.

Based on the Preotiuc-Pietro, Carpenter and co. 2016[4] study, Figure 1 below shows the highest correlating words of each dark-triad trait, where size correlates with the association of the dark-triad trait and the colour reflects how often the word is used for that trait. For instance, grey means not often, blue means often and red means very often. For example, the word “things” is used often by narcissists, and on some occasions, they use the word “particular”. Monitoring the use and frequency of use of these keywords could indicate the trait of the person behind the text. 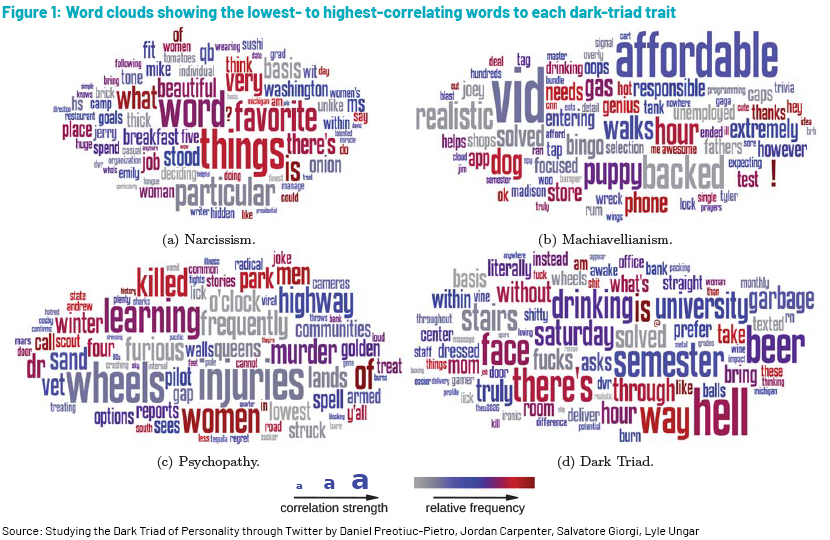 Figure 2 below, from the same paper, shows the correlation between the different dark-triad traits (Narcissism, Machiavellianism and Psychopathy, and Dark Triad – a combination of the three traits). We observe strong inter-correlations between all dark-triad traits; the paper details the idiosyncrasies of each trait.

Acuity Knowledge Partners can support research and analytics functions of asset managers, hedge funds and investments banks to generate insights from natural language text to identify such behavioural traits of management and board members by analysing, for example, the text they post on social media or the words they use on earnings calls. The initial step would be to automatically acquire background information and public statements from executives of a basket of companies; the textual data can then be cleansed and structured, ready to be analysed. A manual effort with a strong understanding of psychological linguistics would be required to label the textual data identifying the personality traits exhibited in the textual data. This labelled data serves as the training dataset to train deep-learning or machine-learning models to classify the personality traits from the textual data. We could then systematically gauge the behavioural traits of board members and use this intel in conjunction with traditional business performance metrics to make a call on the future prosperity of a company. Such insights and signals pave the way for transparent investment decision making, providing an ESG lens to analyse the people behind companies of interest by incorporating these findings as additional inputs for sustainable investing practices.

2. A Survey of Automatic Personality Detection from Texts by Sanja Stajner and Seren Yenikent Association for Computational Linguistics 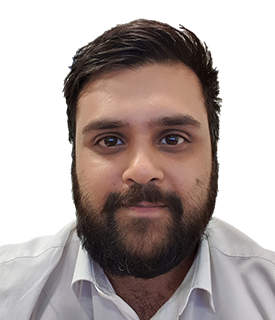 Usman is the Chief Data Scientist at Acuity, responsible for AI/ML strategy and implementation for key client relationships. He joined Acuity in 2018 and has over 10 years of experience in delivering analytical and risk management solutions to global capital markets participants using state-of-the-art platforms. Prior to joining Acuity, Usman worked at Lloyds Bank, Goldman Sachs and UBS in front-office and middle-office functions. He holds a Master’s degree in Mathematics and Computer Science from Imperial College London