The countdown to a post-LIBOR world

The passage of the recent legislation in key London Interbank Offered Rate (LIBOR) jurisdictions (New York, the UK and the EU) seeks to support an orderly wind down of LIBOR. This white paper critically assesses whether these legislative fixes will alleviate legal uncertainties/lawsuit threats and mitigate disruptions to tough legacy contracts maturing in a LIBOR-free era. We also outline potential gaps in the current LIBOR laws and attendant risks.

• The majority of outstanding LIBOR contracts are governed by New York State (NY) law or English law. English law calls for the consent of a minimum of 75% bondholders to amend interest rate provisions set out in an indenture, while consent thresholds of 100% are typical under NY law. Consequently, the renegotiation of contracts is unfeasible

• Around USD1.9tn of the current US LIBOR exposure to bonds and securitisations will mature after June 2023. The majority of these legacy contracts have inadequate fallback language

• Recently passed state laws in the US establish Secured Overnight Financing Rate (SOFR) as a benchmark replacement for LIBOR in legacy contracts with inadequate fallback language and mandate an automatic conversion to SOFR upon LIBOR’s discontinuation. The laws also attempt to provide a safe harbour from litigations and ensure the continuity of contracts

• Legal challenges to US state LIBOR laws can still arise unless a proposed federal bill is passed, as federal laws, such as the Trust Indenture Act (TIA), may limit the efficacy of state laws

• Asset managers who have previously carried out inventories of their LIBOR exposure and drafted LIBOR transition plans should review their legacy contracts to determine their state/country of legal jurisdiction, as well as applicable laws and their economic consequences

• Leveraging its expertise in the analysis of fallback language, Acuity Knowledge Partners’ (Acuity’s) Fixed Income team has developed a suite of tools to assist clients, including a proprietary quantitative scoring framework that systematically ranks fixed-income issuances on a scale of “well prepared” to “worst prepared”. Acuity analyses indentures to determine likely LIBOR replacement rates based on laws governing the country of jurisdiction and identifies potential overlaps or conflicts in laws. 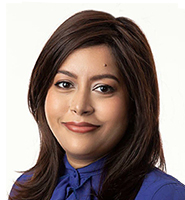 Lourdeena Kudaliyanage has over 12 years of experience in investment research. At Acuity Knowledge Partners, she is part of the Fixed Income and Credit Research team in the Investment Research division, currently supporting a European client. During her tenure at Acuity, Lourdeena has worked for leading buy side and sell side firms covering multiple sectors, focusing primarily on frontier and emerging markets, with expertise in thematic and company research. She is a CFA charterholder and holds a BSc Econ (Hon.) and MSc in Financial Management from the University of London.

The countdown to a post-LIBOR world