Extract from the article: “Atul Prasad Gupta, Assistant Director with our oil and gas practice, is featured in TradeWinds in a story on how gas carrier markets could play out after March.

“Asian producers are also starting to cancel LNG cargoes as the region's refineries come back on stream after winter maintenance….The record spot rates of $350,000 per day for tri-fuel diesel-electric (TFDE) carriers seen at the start of the year are unlikely to be repeated…

….This is a temporary disruption and is likely to normalize…Most of the buyers in Asia, they have started cancelling some of the cargoes scheduled for February and March because they see a delay in the cargo, and non-availability of ships, plus the charter rates are very high…There will be a reduced reliance of Asian buyers on Atlantic cargoes, cutting congestion in Panama..” 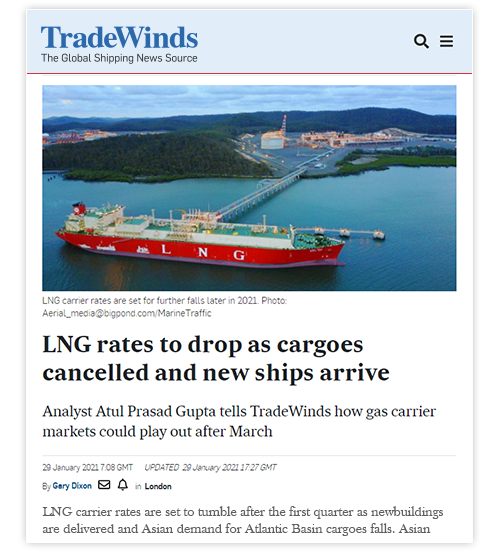 Rajul Sood, our Head of Commercial Lending So...... Read More

Our Investment Banking team contributed to a ...... Read More