Spotlight on gold: Is pandemic-related volatility taking away its shine?

Published on January 29, 2021 by Lakshya Saxena

A brief look at the history of gold. Civilizations most likely first learnt about the existence of this precious metal in rivers and streams, when its lustre caught the eye. The acknowledged history of gold goes back a long way: according to the National Mining Association, “gold was initially used by cultures in modern-day Eastern Europe in 4000 BC to make decorative objects”.1 Clearly, the “precious yellow metal” has a long and storied past of obsession, one that dates back more than 6,000 years.

Gold is often described as a “safe-haven asset”, for it has acted as a store of value, preserving its purchasing power for over thousands of years. Simply put, the price of gold remains stable when prices of everything else move in an unpredictable manner. Gold has “conventionally been one sort-after asset that people go to for safety and financial security” in times of economic, socio-economic or even political turmoil.

The rise and fall of the “gold standard” – when gold was the real deal. Early in the 20th century, economies tied the value of their functional currency to the value of gold reserves they had in store. The “gold standard” used was initially implemented as a gold specie standard, essentially characterised by the exchange of gold coins within the economy. Subsequently, with the introduction of alternative forms of money (metal coins and paper bills), gold coins were eventually replaced by banknotes. This created what we know as the “gold bullion standard”. This is a system in which gold coins are not circulated. Instead, the authorities agree to exchange gold bullion on demand at a fixed price in exchange for the legal tender in circulation. However, soon after World War I, this gold standard largely collapsed as nations became wary about trading gold with each other. The primary reason for the gold standard failing to reassume its position after World War I was the Bank of England's dwindling liquidity position and the gold-exchange standard. In addition, a “run on the sterling” caused Britain to impose stringent exchange controls that fatally weakened the gold standard. Surprisingly, convertibility was not legally discarded. However, gold prices no longer exhibited the character of “a standard” they did before. A decision that ultimately shaped the downfall of the gold standard was the US effectively abandoning the gold standard in 1933 to help combat the ill effects of the Great Depression (1929-39). This completely severed the link between the dollar and gold by 1971.

The highs and lows of 2008 – a key year that shaped gold’s future. As economies opened up under agreements for free trade and currencies were de-linked from federal gold reserves, the precious metal did not lose its value; investors (and governments) across the world still perceived the yellow metal as a store of value. Largely underpinned by investors’ perception of the market, gold prices have exhibited a negative correlation with the stock market, as investors who suspect a bearish market generally take long positions in gold futures to safeguard their investments. However, surprisingly, during the 2008 financial crisis, gold prices fell to their lowest for the year – USD692.50/ounce, in the wake of the Lehman Brothers collapse on 15 September 2008. The traditional correlation fundamentals were undermined and gold prices turned down in 2008. At the peak of a selling panic in the wake of economic turmoil, everything that is not bolted to the floor tends to get liquidated first. This means that highly liquid assets such as gold and silver are often among the first asset classes to be liquidated. All markets, gold included, plunged in October 2008 as credit markets collapsed across the globe. At the time, gold was being liquidated as investors, including treasuries and individual investors, sought funding to cushion the losses incurred in other markets and asset classes. As a result, for several months after the mayhem, even the precious metals followed the stock market lower. Overall, the gold price declined by roughly one-third from peak to trough.

However, a research note by Dundee Precious Metals states that ‘the 2008-09 crisis set the stage for gold prices to rise in the next 10 years, against the backdrop of measures such as fiscal and monetary reflation, investment demand, the bullish price cycle in gold and geopolitical worries’2. History repeated itself in 2020, albeit with a twist. Gold's cogency as a safe haven was tested stringently amid the pandemic in 2020. Buyers and sellers (traders), strategic investors and central banks took an active position towards the bullion on a global scale. The outcome was predictable, in the effort to evaluate unpredictability, while recognising gold's inherent worth. As the global financial framework came to a standstill, gold experienced significant market disturbance and reached unprecedented valuations. It reached USD2,000/ounce in August 2020 as investors rushed to buy the yellow metal, double its value in 2015. Gold should have continued its rally, but it was the US dollar that stole the show. Yields of US Treasury Inflation-Protected Securities (TIPS) fell to their lowest, driven by the announcement of a substantial stimulus package. This was largely because what really matters when it comes to gold is real rates of interest and not nominal yields (such as high and accelerating inflation rates, which affect gold and bonds differently). The following charts show that real interest rates are some of the most important drivers of the gold price.

As the pace of stimulus picks up, with the Fed keeping the interest rate near zero (in September 2020) until the economy recovers, the gold price is on a downward trend – it plummeted to USD1,750/ounce from USD2,065/ounce in just four months. The main reason for this was the rally in the dollar index. As economic data started to improve due to a contraction in the number of COVID-19 cases and the easing of lockdown restrictions, risk-averse investors turned risk-tolerant, believing the future for risky assets is bright. What to expect in 2021 – will gold get its vaccine or fall prey to another hiatus? As in 2020, gold prices will likely be influenced by yields. We believe yields will be kept lower and inflation will be allowed to rise above target, at least in the US, keeping the gold price around USD1,900/ounce. Fundamentally, physical demand for gold should pick up, partly due to a robust recovery in consumption, which should boost the price in the near term. However, the recovery would be somewhat dependent on the sentiment of millennials, who have different views on what a safe-haven asset should be.

The old saying “All that glitters is not gold” captures the current trend well.

Acuity Knowledge Partners provides a number of solutions to banks and other lending institutions to help them analyse the impact of macro-indicators on their portfolios. By gaining an in-depth understanding of the results of such trends, these entities could re-assess their exposure by class of loan/ investment/borrowing and identify early warning signals. 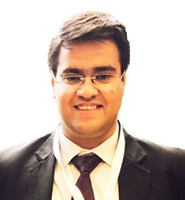 Lakshya has 6+ years of work experience in commercial lending and valuation. He has been with Acuity Knowledge Partners for over a year, working closely with the Leveraged Lending and Counterparty Portfolio Management teams supporting the US and UK operations of one of the largest European investment banks. He is responsible for preparing comprehensive credit models and reviews of large and mid-size corporates, preparing internal rating models and conducting residual recovery value analysis of the corporates covered.

Lakshya has worked with two of the big four audit firms and one of the largest analytics firms in the fields of advisory and valuation, with responsibilities ranging from creating standardised templates for audit procedures to performing complex valuations of securities for financial reporting requirements. He holds an MBA from the National Institute of Financial Management (under the Ministry of Finance of the government of India).

The year 2021 was a mixed bag of opportunities and challenges. Despite the pandemic-induce....Read More

All focus is on when the Fed will start tapering its bond-buying programme to position its....Read More