IFRS 16 has come to town; should lenders be cautious?

Published on May 9, 2019 by Deshitha Amarasinghe

IFRS 16 Leases published by the IASB in January 2016 came into effect on January 1, 2019. The new standard replaces IAS 17. However, certain licenses to assets, such as biological assets, intellectual property, and rights held under licensing agreements, are not within the scope of IFRS 16.

Under IAS 17, operating leases were recognized off the balance sheet, as the lessee would not ultimately own the asset until the end of the term. Finance leases, on the other hand, were accounted for as assets on the balance sheet as “right-of-use asset” and “lease liability”. Under IFRS 16, all leases will effectively be capitalized, which will be subject to depreciation; the lease expense component will be charged on the income statement. However, short term leases (term of 12 months or less) and leases for low-value assets (generally less than USD 5,000) are exempt from this rule.

Under IFRS 16, EBITDA will be inflated, as previous rent expense will now be captured under interest payments. The resulting change will further impact a lessee’s financial metrics, including the leverage ratio, fixed charge coverage ratio, ROE, and ROCE.

As lease payments will be categorized under liabilities, a company’s gearing would rise more than its EBITDA would. According to a report published by Deloitte, 50 Dutch publicly listed companies have indicated that their net debt has grown c. EUR45bn (an increase of c. 30%). As a result, leverage ratio multiples would increase, which would significantly affect covenant compliance.

Restrictive covenants, such as negative pledge and financial indebtedness, would become even more restrictive, triggering clauses such as “event of default,” further triggering cross-default provisions where applicable. Borrowers would need to either amend such covenants post IFRS 16 or carve out former operating leases from their debt calculations.

Consequently, accounting metrics, such as ROE, will increase as shareholder equity decreases. ROCE will decline, as the increase in capital employed will be greater than the increase in operating profit.

Lenders will need to validate whether their current credit agreements incorporate the changes made to the accounting standards. One method of averting such complications is if the agreement is based on frozen GAAP covenants (where the party uses the applicable standards at the time the agreement was made); however, this would mean that companies would need to maintain two sets of books, which would be time consuming and costly, as well as tedious for organizations with a large group of companies. On the contrary, borrowers could provide their statements in IFRS 16 and another reconciliation statement, which indicates accounts conducted under IAS 17. In case of breaches, lenders could look at the covenants on a case-by-case basis. This is because a company that is already poorly rated owing to high leverage would suffer a material adverse impact compared with one that is highly rated. In such cases, lenders might grant waivers or increase the covenant threshold for the short run.

Owing to the implementation of IFRS 16, leasing could become unattractive, as lessees are no longer allowed to recognize leases off the balance sheet. A PwC study shows that post-IFRS 16, the median increase in debt for retailers could be as high as 98% and the median increase in EBITDA could be c. 41%. The Airline sector would follow Retail, with an estimated increase of 47% and 33%, respectively. Furthermore, companies could incur higher administrative costs to comply with the new standard. This is because the separation of lease and non-lease components will require significant management administration time and effort; this would mean that lessors might need to provide information to separate such items.

Acuity Knowledge Partners collaborates with lenders, given its in-depth credit risk knowledge in forecasting the adverse impact of IFRS 16 on a lender’s portfolio. Furthermore, Acuity Knowledge Partners performs covenant monitoring (internal validation) for clients, gauging imminent or potential covenant breaches and thereafter suggests appropriate covenant thresholds to lenders. This helps in eliminating any breaches due to the implementation of IFRS 16. 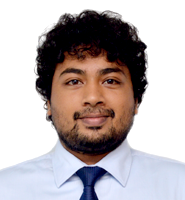 Deshitha is a Delivery Lead at Acuity Knowledge Partners Commercial Lending team in the Colombo office. He has over 3 years of experience at Acuity Knowledge Partners. Earlier, he supported a sell-side investment bank by carrying out rating assessments, creating pitch books (involving issuer/sovereign analysis of credit profiles, among other factors), and performing other fixed income-related tasks. He holds a Bachelor of Science degree in Economics and Finance from University of London, UK.